On Monday the Preiskel and CEG teams were delighted to host a seminar discussing various concerns and potential changes regarding competition and regulatory policy.

The first panel focused on regulation and oligopoly in telecoms markets. Debate included whether oligopoly led ipso facto to bad consumer outcomes or whether there is scope for oligopoly to lead to positive outcomes.
The panellists also discussed whether oligopoly needed a new approach to regulation and what the focus of such regulation should be – short-term consumer welfare, investment, innovation.
The main question resulting from the session was whether, as technology changes, the current regulatory framework will be adequate to address a shift to full-fibre infrastructure and 5G.

The second panel focused on the impact of market concentration on the value chain. Particular attention was paid to the current European Commission investigations into Google’s conduct, and Google’s appeal.
Further discussion centred on the increasing importance of data and whether competition law adequately addresses the problem of data transfer in mergers, as well as potential reforms which might address such issues.

The third panel considered possible policy responses towards issues of concentration and market power, particularly in the technology sector. One key problem was highlighted as increasing profit margins, a phenomenon on which increasing evidence is being put forward by economic commentators.
The idea of merger control regimes being reformed to prevent small innovative firms being purchased by larger firms without any form of regulatory scrutiny was suggested.
Others highlighted the need for improved tools with which economists might model impacts upon considerations other than price, such as innovation – which is currently notoriously difficult to model, in particular “left-field” innovation.
Another issue raised was the necessity to consider other aims of competitionpolicy and regulation, in addition to short-term consumer welfare, including the protection of personal data, possible protections for “critical national infrastructure”, even the protection of democracy itself.
Finally, the problem of concentration of ownership, such as by large hedge funds, of the top firms in a given industry and the indications that this has a negative impact on competition was raised, with the example of executive remuneration in banking often being linked to sector performance rather than firm performance.

A particularly interesting range of discussions, and much food for thought.

We are developing proposals for reform and will be making submissions to the House of Lords Call for Evidence by Friday 15th September – thoughts and suggestions are most welcome. Please contact Claire Barraclough. 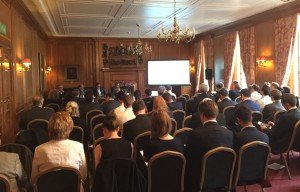